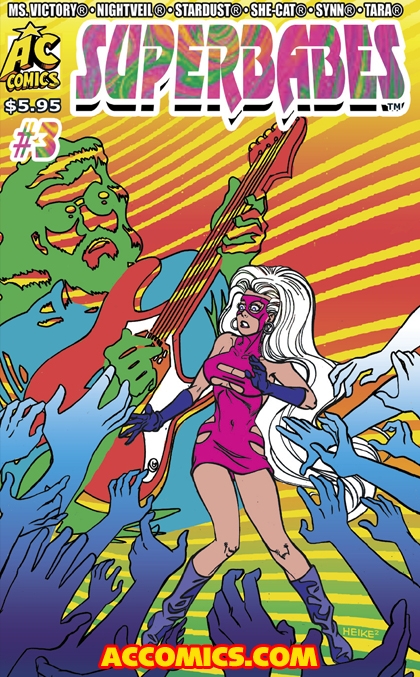 Synopsis: FULL COLOR third issue!! In an offbeat, untold story out of the past, an inexperienced SYNN faces a reprobate who has stumbled on the ULTIMATE POWER in “Come And See Uncle Jon’s Band”- a FEMFORCE story like no other!! PLUS- the eerie ORIGIN of the hideous villainess GORGANA!!

The awesome third issue of AC’s bold new FULL COLOR Femforce title, SUPERBABES; will be coming your way in January, 2020!!
Long-time FEMFORCE readers know that SYNN is probably THE most unique character in the group- if not in all of comics. Not only had she never intended to become “a heroine”, but the unfathomable reality-changing power she had thrust upon her , left unchecked, COULD be THE greatest threat to the universe as we know it. Taken into the FEMFORCE team with the thought that Ms. VICTORY, NIGHTVEIL, SHE-CAT and the others would have the best shot at averting calamity should she ever lose control, early missteps in her FF career ACTUALLY got SYNN banished to ANOTHER DIMENSION for several decades JUST to keep our reality safe! But, there were some early SYNN triumphs as well, and the lead story in SUPERBABES #3 relates one of them, set in the 1970’s.
When law-enforcement authorities come to the FF to look into some mysterious occurances and team leader Ms. VICTORY dismisses them as “out of the FF’s line”, SYNN is given “the case” as a way to keep her occupied and out of the team’s hair for awhile. Little does anyone suspect that the incredible power that a one-in-ten-billion-chance accident bestowed upon a down-and-out musician could end up a threat to the world as we know it. No one but SYNN could stop him, and when she does (in her own inimitable fashion), NO ONE- not even her own FF teammates-knows that she HAS. It’s all in “Come And See Uncle Jon’s Band”, written by Mark Heike, with art by Stephanie and Mark Heike.
Then, it’s the untold story behind the hideous, man-hating GORGANA- a villainess that’s been around since the FF’s FIRST in-print appearance in 1980. You’ll finally find out WHO she is and how she got that way in “Heir Of The Gorgon That Bit Me”, written by Stephanie Heike, with art by Stephanie and Mark Heike.
The new AC Comics color line has garnered quite a bit of positive attention throughout the industry since we debuted it this summer- jump on the AC bandwagon before it passes you by. We may have been around for 36 years already, but the BEST is YET to come!
Be sure to tell your retailer to order SUPERBABES#3 from the November 2019 issue of Diamond’s Previews catalog, for items shipping in January 2020. SUPERBABES #3- great “good girl” art and superheroic action in unusual stories in FULL COLOR, digitally printed on glossy stock, for $5.95, from AC Comics.