Femforce #177 is FINALLY available!! Inside a moody Jacob Bear cover highlighting the awesome spectacle of the heroine known as FIREBEAM you’ll find EIGHT stories starring the FF and their assorted friends. First up, Ms. V, SHE-CAT, TARA, STARDUST, SYNN (and guest-star Roberta Strock) cross paths once again with their protege FIREBEAM, who’s come to FFHQ for help . Unknown to the elemental flame spirit, she’s been the victim of an assault by old FF villainess GORGANA. When the team urges FIREBEAM to use her abilities in a very unusual manner, what is revealed may just pull the team (and their story)in a suprising new direction, in “Girl On Fire”, written by Stephanie and Mark Heike, with art by Rock Baker, Mark Heike and Scott Shriver. Then, NIGHTVEIL (still on Dark Dhagor) and KAMALFA use guile and strategy to best VIVARNA and her mystical cohorts in a battle to free Dhagor and it’s people, in “Any Color You Like”, scripted by Mark Heike, with awesome art by penciler Dan Gorman and finisher Jeff Austin. Then, it’s a change of pace as events take a strange turn in a test of new technology involving SYNN, STARDUST and guest-star REI in “White Out”, written by Mark Holmes with breezy, animation-style artwork by Scott Shriver. Things get a little more serious in “Stand Your Ground”, as Ms. VICTORY puts an end to a tense hostage situation involving a grave new threat to the AC universe, thoughtfully written by Andrew Hawnt, pencilled by Francesco Savi, and inked by Jeff Austin. STARDUST must fend off multiple versions of herself (from different time periods) created by an alien automaton in “The Nemesis Selves”, written by that man again, Andrew Hawnt, and illustrated by cover artist Jacob Bear. STORMY TEMPEST is back, in an adventure straight out of the 26Th century as she meets a new ally, and beats a bunch of space monsters in “Thrilling Science”, scripted by Madman Mark Holmes, with art by David Matsuoka. DINOSAUR GIRL plays a return engagement in “Legacy”. It’s 1954, and Vivian (DINOSAUR GIRL) Strand and her husband Rex now have a daughter. See how Rex’s encounter with an atmospheric anomaly leads to a reveal about the rest of the future for the DG cast of characters. Written and drawn by Rock Baker, with great inks by Scott Shriver. Finally, our smash-hit flip-book guest-feature from FF #174 is back, as The ATOMIC BLONDE returns in “Beware The Weremacht”. It’s May of 1943, and AB’s heroic act of liberating a trainload of inmates from the Dachau concentration camp brings on the ire of a giant Nazi monstrosity known as… The WEREMACHT!! Written by Joseph A. Michael, drawn by Dan Gorman and inked by Scott Shriver. Check out the great Dan Gorman painted ATOMIC BLONDE flip- cover on the back of the book- stupendous!! It’s 80 pages of all-new, never-before seen story and art, black and white inside full-color covers, standard comic book size and saddle-stitched from AC Comics for $9.95. Released in 2017. 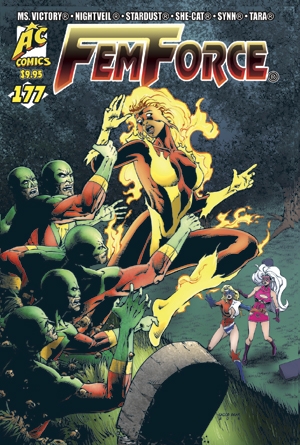 You're viewing: Femforce #177 $9.95
Rated 0 out of 5
Add to Cart
Shopping Cart
There are no products in the cart!
Continue Shopping
0