The time-displaced villainess WAMPYR has now shown her true colors after years of behind-the-scenes machinations, and the FF are there to face-off with her in California. But with the FF’s mystic mistress NIGHTVEIL off, dimensions away on Dhagor; how can Ms. VICTORY, SYNN, SHE-CAT , TARA and STARDUST stand up to an enemy that is not only an undying vampire but a supremely powerful sorceress as well? The answer is- they CAN’T. See how it all shakes out in “Whatever Will Be Will Be”, a feature-length FEMFORCE lead story in three chapters written by Mark and Stephanie Heike, with pencils by Scott Shriver, Rock Baker and Stephanie Heike, and ink finishes by Jeff Austin. Then, everybodies’ favorite interplanetary adventurer, STORMY TEMPEST is back in “Flash From The Past”. Falsely branded as an outlaw in the 30th century, Space Patrol officers Carol and Tonga enlist the aide of a visiting dignitary (from the 20Th century), CAPTAIN FLASH to track down Stormy. And track her down he does, just in time to save her from the clutches of the evil LEATHERETTA, at the expense of several dozen alien cutthroats and murderers- but not before CF gathers the evidence that will exonerate Stormy. But how much good will that do Stormy when she finds herself stuck in the past? Story by Bossman Bill Black, with pencils by Riccardo Desini and inks by Jeff Austin. Next, it’s a story out of TARA FREMONT’S past as we see a college-age Tara don a mysterious disguise to save one of her father’s faltering businesses  in “Rally ‘Round The Flag”, written by Mark Holmes with art by John Sowder and Scott Shriver. Finally, an enigmatic magician seems to have coerced Ms. VICTORY into cooperating with him on some nefarious scheme in “Pas De Deux”, an intro to next issue’s lead feature, written by Chad Halcom anf illustrated by Francesco Savi.Who IS the mysterios RED MOON, and why would Ms. VICTORY choose to aide him? 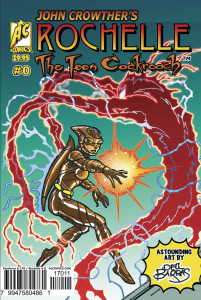 But that does NOT signal the end of great story and art for FEMFORCE #170- not by a LONG shot- because if the reader will flip the book over and turn it upside down, they’ll find THE most exciting NEW character to debut in 2015, ROCHELLE The TEEN COCKROACH take her bows as a full-fledged, 23-page flip-book guest feature sharing FF #170!! Created by talented author John Crowther and illustrated by industry great Dell Barras, Rochelle Planeta is an ordinary American teenage girl- who happens to be infused with cockroach DNA! The surprising powers and abilities this genetic mix creates give her a leg up on her goal to “…Eliminate all forms of filth, corruption and vermin!” In this, her first in-print adventure anywhere- “Get Ready For A Mindcrash”- Rochelle must battle an inhuman creature INSIDE an online video game to free countless “kidnapped” youths. A new kind of superheroine- daringly different!! Story and script by John Crowther, with pencils, inks and letters(and flip-cover) by Dell Barras. That’s FEMFORCE#170/ROCHELLE THE TEEN COCKROACH#0, 80 pages of all-new, never-before-seen superheroine action at standard comic book size, in black and white with TWO full color covers (FEMFORCE on the front and ROCHELLE on the back, as the flip-cover) saddle-stitched .Released in 2015.

Cart
Search…
Shopping Cart
There are no products in the cart!
Continue Shopping
0