AC has ranged far and wide to bring readers a refreshing “new” sampling of Golden Age heroes to chronicle in the big, 108Th issue of Men of Mystery Comics. BULLETMAN was a frequent and popular feature in early issues of MOM, but we haven’t run him lately. This issue we rectify that with a rollicking romp pitting BULLETMAN and BULLETGIRL against The Wizard, from Wow Comics #36. Jack Cole’s MIDNIGHT fits the same profile, and he’s here this ish as well, as MIDNIGHT, Doc and the gang get tangled up in a crooked boxing match in a story from Smash #74. We’ve only ever done ONE story of Fox Features’ stars-and-stripes super-guy, U. S. JONES; but we’re adding another one here, right out of Wonderworld #32. Jones’ co-star from that book, The FLAME is here as well, along with his costumed partner FLAMEGIRL. Bob Powell’s MAN in BLACK appeared mainly in short stories later in his run; early on, MIB ran at feature length. This issue will showcase one of his earliest appearances (from All New #14), “Underground To Oblivion” GREEN LAMA rings in with a Jack Binder-drawn saga from his early Prize Comics run as he investigates some stolen Iriqouis artifacts. A quartet of other heroes will make only only their SECOND appearance EVER in MOM this time around, and that group includes the boy hero BOMBSHELL (drawn by Norman Maurer), Dr. FROST, SUPER-AMERICAN ( by Dan Zolnerowich), and The BLACK OWL!! Debuting in MOM #108 will be a pair of heroes- the mysterious mage known as TAO ANWAR, and Fiction House comics’ gritty, trenchfighting COMMANDO RANGER, as drawn by Artie Saaf. All this plus LADY LUCK, The SPACE RANGERS and another surprise or two, all in Men of Mystery #108, 140 pages of black and white classic reprints NOT seen ANYWHERE since their original printings 60-plus years ago, in standard comic book size and format, saddle-stitched with a full-color cover; $29.95 from AC Comics in late May, 2018. Preorder it at your local comic dealer from the March issue of Diamond Previews. 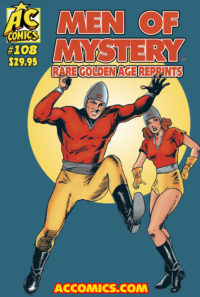 You're viewing: Men of Mystery #108 $29.95
Rated 0 out of 5
Add to Cart
Shopping Cart
There are no products in the cart!
Continue Shopping
0