Due to demand, we have made a limited number of Superbabes#2 available on our AC Comics webstore. We only have a handful available from us. We urge you to buy these books from retailers rather than from us! 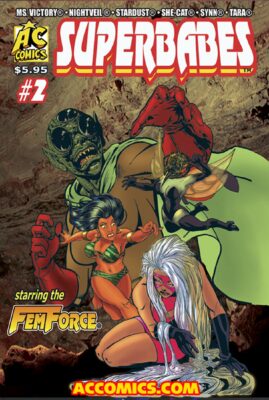 Synopsis: FULL COLOR second issue!! The half-insect, undead sorceress WAMPYR and the grotesque shape-changer GORGANA have escaped incarceration! Why have they teamed up; what is their plan- and can The FEMFORCE possibly stop them? One out of every five copies ships with a special GREG HORN painted cover!!

The thrilling second issue of AC’s smashingly successful new FULL COLOR Femforce title, SUPERBABES; will be coming your way in October, 2019!!
Anyone who knows anthing about The FEMFORCE is aware of the fact that in addition to being intelligent, talented and supremely-skilled crimefighters, the team is made up of six beautiful, unique and glamorous women. SUPERBABES #2 will pit the Ms. VICTORY, NIGHTVEIL, SHE-CAT, SYNN, TARA and STARDUST against two of their most grotesque (not to mention dangerously powerful) distaff foes whose joining of forces MAY portend far worse villainy yet to come!!
WAMPYR came into the AC Universe as a vampire with great skills in the Black Arts, originally vanquished and destroyed millenia ago but accidentally reanimated and brought into the present by NIGHTVEIL herself. After a long, ongoing storyline (that culminated in the sold-out FEMFORCE #170), the simultaneous application of a magical spell of permanence AND the synesthrophic physical alteration of her skull left her with the body of a “normal” (albeit undead) woman and the head of a GIANT BEE! Subdued by the FF, she had been imprisoned at the enigmatic Colorado Complex while the technicians there studied her bizarre condition.
GORGANA actually predates AC Comics itself, having made her first appearance in THE VERY FIRST FEMFORCE story EVER PUBLISHED in Bill Black’s Paragon Publications’ Femzine #1, released in 1980. This bizarre , three-eyed creature with the ability to temporarily paralyze any male AND impersonate any female has been intermittently bedeviling NIGHTVEIL, The FEMFORCE team, and various and sundry members of the AC Universe ever since. Recently, a GORGANA scheme to siphon the energies of the FF’s ally FIREBEAM went afoul, which allowed the FF to pack HER off into protective custody at the Colorado Complex as well.
Can we be SUPRISED that these two gals, united by their hideous deformaties, antisocial tendancies and hatred of The FEMFORCE became FAST FRIENDS within the confines of the Colorado Complex Maximum Security Detention Center? Once they manage to break out and win their freedom, is anyone anywhere safe? Find out in SUPERBABES #2, in “Heads I Win, Tails You Ooze” written by Mark and Stephanie Heike, with art by Javier Lugo and Jeff Austin, and colors by Stephanie Heike.

1 product in the cart.